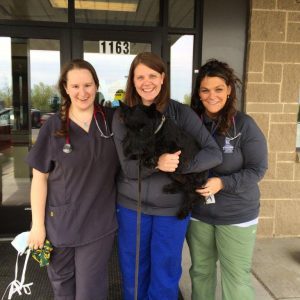 Dr. Shadwick  found a mass on Teddy Bear’s spleen, and his lymph nodes were also enlarged. Judy, upon hearing that Teddy Bear had a mass on his spleen, said she “was shocked, particularly because of his relatively young age of six years old.”

Now that we knew Teddy Bear had a mass, what were his options? That depended on what type of mass it was. If the mass was benign and could be surgically removed, Teddy Bear could live to a ripe old age. If the mass was a malignant hemangiosarcoma, surgical removal might buy him only one to three more months, plus several more if Teddy Bear’s owners added chemotherapy to his treatment plan. Other types of malignant cancer might mean a better prognosis for Teddy Bear, but Gregory and Judy wouldn’t know what type of cancer their beloved dog had until the mass was removed and evaluated by an expert.
Teddy’s owners chose to proceed with surgery to remove the mass on his spleen and to have it evaluated.  Dr. Nate Rose, our board-certified veterinary surgeon, was called in to perform Teddy’s surgery.

Teddy Bear recovered well from his surgery, and the mass turned out to be lymphosarcoma, a type of malignant cancer common in Scottish Terrier dogs. Just before New Year’s Eve, 2014, Teddy Bear started chemotherapy treatments at AERC. He would receive chemotherapy for five months, and by his last treatment in May 2015, Teddy Bear’s cancer would be in remission.

We checked in with his owners, Gregory and Judy, to see how Teddy Bear is doing after the completion of his cancer treatments. Judy said, “Teddy Bear quickly went into remission after the start of his chemotherapy.  It has been seven months since his diagnosis and he remains cancer-free.  His attitude is normal, and our wonderful Scottie dog is still with us.  Dr. Shadwick and his staff were very compassionate and professional.  His turnaround has been nothing short of miraculous.  We are very grateful to the exceptional people at AERC.”

Watch this video to hear what Teddy Bear’s mom had to say on the last day of chemotherapy: