Teddy Bear is a handsome, six-year-old, Scottish Terrier. He first came to Animal Emergency & Referral Center of Minnesota through our emergency service on December 11, 2014. His owners, Greg and Judy, noticed that Teddy Bear seemed to be more and more weak and sleepy over the previous two weeks. His belly was also bloated. When he arrived, Teddy Bear was definitely in critical condition. 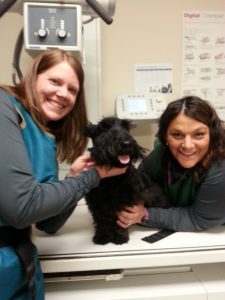 One of the first things our emergency team did was to check Teddy Bear’s belly with an ultrasound probe. Teddy Bear’s abdomen was so large because it was full of blood. But why? There were at least three likely causes for the free blood in Teddy Bear’s belly. If he had gotten into rat poison, which causes hemorrhage, Teddy Bear’s blood could be leaking into his abdomen. If he had an autoimmune disorder, his body could be attacking its own platelets, causing spontaneous bleeding as well. Lastly, if Teddy Bear had a mass or tumor somewhere in his abdomen that ruptured, that would also account for the blood.

Greg and Judy didn’t think Teddy Bear had gotten into rat poison, and according to lab tests, his blood seemed to be clotting normally. His platelet count was low, but not as low as it should be if he had an autoimmune disorder. In order to rule out the third possibility, cancer, our emergency doctor recommended that Teddy Bear have a thorough abdominal ultrasound performed by Dr. Shadwick, our board-certified veterinary internist. Dr. Shadwick could evaluate Teddy Bear’s organs and look for masses or other signs of cancer. Teddy Bear’s owners agreed, and Dr. Shadwick was called in.