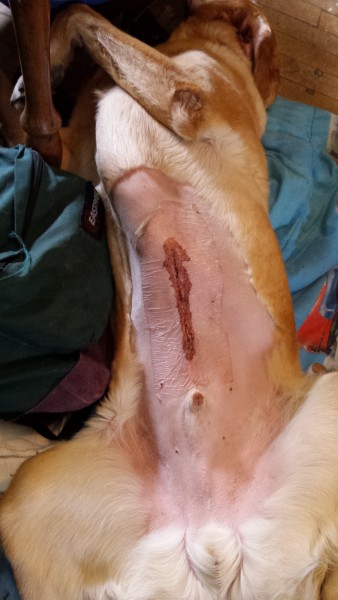 STOP! If you haven’t read Part I yet, go here to read the first half of Buddy’s story and what led his parents to bring him to AERC.

IF YOU HAVE READ PART I, THEN WE KNOW YOU CAN’T WAIT TO FIND OUT WHAT WAS WRONG WITH BUDDY! NOW, WE CONTINUE OUR INTERVIEW WITH BUDDY’S MOM:

Dr. Bush told us that indeed we were not looking at any internal organ failures, but a blockage. There was a MARBLE!

IT’S COMMON FOR LABS TO EAT STRANGE ITEMS AROUND THE HOUSE. DOES BUDDY OFTEN GET INTO ITEMS HE SHOULDN’T?

Buddy went through puppy class and he is so smart and so well behaved (most of the time) that we can leave a steak on a plate and as long as it’s on a plate he won’t touch it. Never been a big chewer or into eating random things so it was really weird that he swallowed the marble. I guess that’s why none of us even gave it a thought that he would do that.

WHAT WAS YOUR REACTION WHEN YOU HEARD SURGERY HAD TO BE PERFORMED TO REMOVE THE FOREIGN OBJECT?

I was absolutely ecstatic when they told us it was a foreign body blockage instead of it being from some sort of cancer or renal failure! I knew “Hey we can fix that!” The doctor took us into the back area and showed us his X-ray. Clear as day there was the “blockage”. We decided immediately to go ahead and remove it. The only wild card that we had was we were not going to know if there was any damage done to his intestines or bowel because the marble was stuck right where the intestine meets the bowel. So that part was uncertain. But the doctor assured us that even if there was damage that they could fix that also so he would be back to normal. 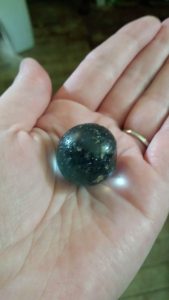 WHAT WAS THE OUTCOME OF THE SURGERY?

The surgeon [Dr. Nate Rose, one of AERC’s board-certified surgeons] that was on that night wasn’t able to make it to the AERC in St. Paul until 10:00pm or so because he was in Oakdale doing a surgery there. The AERC in St. Paul was not open 24 hours at that point. So we had them do the surgery here in St. Paul and then we would assess his condition in the morning and see how he was doing. If he was doing well he could come home early in the morning. If not, we would have to move him from St. Paul to Oakdale to continue his recovery. The surgeon removed a large masher marble. He called us right after surgery to let us know how things went and to answer any questions we had. In the morning, being that he is a little older, he did not bounce back as fast as a younger Lab. He was still not really wanting to eat much and was still pretty sick in the morning. My husband drove him over to Oakdale and they took over the case. They suggested we bring boiled chicken to get him to want to eat, so I did that. He still was not eating well at that point. I came back a little later in the afternoon and he was closer to back to his usual self. We walked around the outside of the building so we could see if he could go potty and he did. We went home that afternoon with some really great instructions and felt really safe that we could call if anything at all seemed off or if we had any concerns at all.

DO YOU HAVE ANY COMMENTS ABOUT YOUR INTERACTION WITH THE AERC TEAM AND/OR THE SURGEONS?

Everyone that we dealt with at the AERC team was really helpful and seemed genuinely concerned about Buddy and about helping us help him get to come home. I feel that the cost was very well explained to us and in a way that was sensitive to our emotions at the time. We were always kept in the loop on everything and we were really encouraged to ask questions and call if we needed to during any part of his stay. There was a small mix up with his paperwork in the move from St. Paul to Oakdale but that was all cleared up with no problem. Everyone there was great!

HOW IS BUDDY DOING NOW?

Buddy is back to his normal, ball-crazy self! His fur took a little while to grow back but you can’t even tell where his surgery was now. I really want to thank everyone for such a great experience and for caring so much about our family. It’s nice to know that we have people we can count on for our pets just a few minutes down the road.

If you notice your pet is acting strange, contact your veterinarian right away. If your veterinarian is unavailable, call Animal Emergency & Referral Center of Minnesota at 651-501-3766 (Oakdale) or 651-293-1800 (Saint Paul).