Have you ever tried to capture action photos of dogs playing? It is nearly impossible to be in 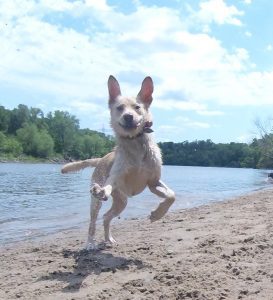 of course the right spot at the right time, isn’t it?  Susie Kixmoeller, a high school senior, came up with the perfect solution. She attached a tiny GoPro camera to a special harness that is worn by her pup, Tula. The camera is set to take a still photo every half second while Tula runs and plays at off-leash dog parks. The photos that Tula captures are all from the perspective of a dog. She captures some amazing shots. Susie set up online accounts (Instagram, Facebook, Twitter) under the name Canine Happy Hour where she shares Tula’s photos each day.

A few months after Susie started posting Tula’s photos online, she received a call from a reporter at Caters News Agency out of the UK. Caters is the UK equivalent to the Associated Press in the US. The reporter asked if Susie would be willing to be interviewed by phone and sell some of Tula’s photos to his agency to use in an article that they would then provide to a variety of publications, of course, aid “yes!” and the resulting story ran in several media outlets, including the London Daily Mail, London Telegraph, and In Touch magazine. 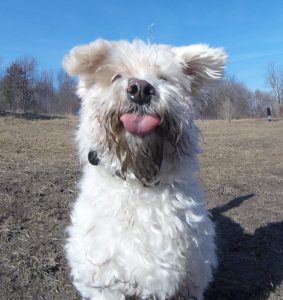 Tula was rescued as a puppy by Second Chance Rescue of White Bear Lake. She and her litter mates had been stuffed into a birdcage and left on the side of a busy road. The moment she entered her new home, she claimed a bean bag chair as her preferred sleeping surface. Despite her humble beginnings, she has turned into a bit of the diva and a very loved family member.

In Tula’s spare time, she visits both Children’s Hospital and Masonic Children’s Hospital as a therapy dog. She brings happiness and comfort for children and their families at a time when it is very appreciated. She loves her hospital visits, wagging her tail from the moment she climbs out of the car and realizes where she is. 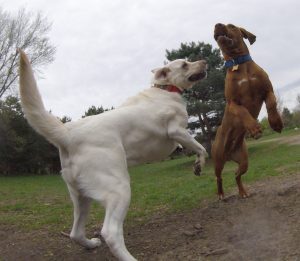 Tula has recently suffered from a groin injury which was not accurately diagnosed until meeting with John Nielsen at Animal Emergency & Referral Center of Minnesota. Tula appeared to be favoring a front leg or shoulder which had confused everyone else. He carefully examined Tula and observed her gait on flat surfaces as well as stairs. We were surprised to learn that her issues stemmed from her groin area rather than one of her front legs where she was limping. Tula was sent home with a long list of exercises which her family kiddingly refers to as her doggie yoga and pilates. Tula is looking forward to returning to her regular dog park visits once she completes her rehabilitation and conditioning program at AERC. Check out Tula using the Underwater Treadmill here!

Photography by Tula the PhoDOGrapher with Canine Happy Hour