Eddie the German Shepherd has touched a lot of hearts at AERC. He has had a rough start in his two to three years of life, and he has benefitted from the collaborative work of several specialty services at our clinic (surgery, internal medicine, emergency, radiology, cardiology, and dentistry!) in an attempt to get him strong and healthy. Luckily for Eddie, he has Emily, a devoted owner and veterinary student who is tackling his problems, one at a time. Below is his story, in Emily’s words! If you would like to donate to help cover Eddie’s veterinary expenses, here is his gofundmeaccount. 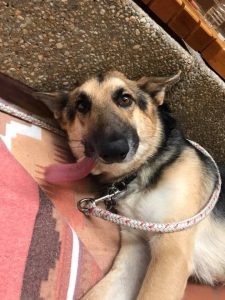 Over the last four years, I have gotten the reputation of “That Shepherd Girl” amongst my friends and classmates since I own and frequently foster shepherds. Over the summer, I got a message from one of my classmates with a picture of a very sad-looking Shepherd, stating that they wanted to pull him from a kill shelter in Arkansas, but they needed an adopter first. I was told that the dog was heartworm positive, had severe fleas and mange, and had a “slight” mouth deformity, but was assured that he was fully functional. I get this strange sixth sense when I see a Shepherd that I just know is a good one; so, naturally I said that I would gladly take him.

Eddie was transported from Arkansas to Chicago to Minnesota and was adopted out through Treasured Animal Rescue Inc. The only thing I knew about Eddie’s past was that he was frequently brought in as a stray to the local impound facility. Eventually, his owners quit picking him up, so he was off to the animal shelter. We will probably never know Eddie’s whole story. What we do know is that he was about as beat up as they come – with both injuries and deformities.  But on September 5th, 2017 I opened my door to a naggy little Shepherd sitting on my stoop, and the rest is history!

As far as Eddie’s medical care, we have been trying to take it one hurdle at a time. First and foremost, he was cleared of the fleas and mange. Eddie also suffered from emaciation, so finding him a strategy to eat and gain weight was a challenge. At first he was very timid and would only eat kibble if it was thrown on the floor. Eventually, he would eat from a low, flat dish, and now he eats regular dry dog kibble like a champ – just swallowing it whole. 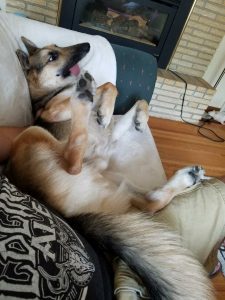 Next, we took on the heartworm infection. He went through the first treatment, and we are just waiting for his six month post-treatment heartworm test, which hopefully will be negative! Now, we are in the process of fixing his mouth. He recently had a CT scan to figure out exactly what is going on in there. So far, we know that the positioning of his jaw has pushed his bottom teeth through the top of his mouth causing an oronasal fistula. He also cannot move what remains of his lower jaw, which creates a pocket where food, saliva, and other debris gets caught and causes infection. We are still determining all the problems that his jaw is currently causing and developing a plan of what can be done. As of right now, he has adapted so well to life without a jaw that the goal isn’t to give him a functioning jaw but to alleviate the pain and discomfort his current jaw is causing. It is safe to say that between the severe starvation, heartworm, mouth infection, and overall neglect Eddie experienced before rescue, that he was on the fast track to the Rainbow Bridge. I’m so glad we could detour him off that track!

The best thing about Eddie is his positive attitude towards life. There is no doubt that he has sustained major trauma almost his entire life, yet, he is the HAPPIEST dog you will ever meet! He is trusting and loving. Cats, dog, rabbits, cows and people – he gets along with them all. He finds contentment in just being with you, and his love is impartial and unconditional. Anyone and everyone is fair game for a snuggle or a nap. I could gush about how wonderful and unique he is all day, but it’s tough to explain without actually experiencing it. For now, we call it the Edward Effect: bringing love and joy to an entire room simply by entering it.

He is also MADLY in love with squeaky toys!