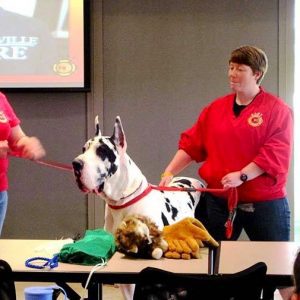 In early June of 2013, I traveled down to the Oklahoma City/Moore area for a few days with a group of volunteers from an organization called Basic Animal Rescue Training (or BART for short). Shortly before our arrival, a massive F5 tornado had devastated the city of Moore. While there, we did several trainings over a couple of days teaching emergency personnel things like safe handling, restraint, how to take initial assessments of pets, perform basic first aid and CPR for pets.

During our downtime, we were able to get out and see some of the devastation. I will never forget driving by empty cement slabs on which houses once stood. It was surreal–almost as if I had walked straight into a scene from the movie Twister. On some streets, houses on one side were completely destroyed, meanwhile just across the street, the houses had little to no 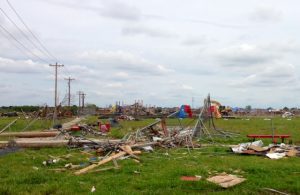 damage. Trees were completely stripped and stood barren amidst fields of unrecognizable debris; cars had been tossed around like toys, turning them into mangled metal balls. There’s really no way to explain what you feel upon seeing such devastation. 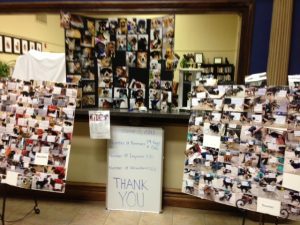 For me, one of the most emotional parts of the trip was touring a facility that housed many lost and displaced pets. I will never forget walking through the front doors of The Animal Resource Center, being greeted by poster boards full of pictures of lost and reunited animals and the sounds of barking and meowing in the background. My eyes welled with tears. The Center did a wonderful job and had amazing volunteers. They opened their doors to us really late in the evening to give us a tour around the dog, cat, and isolation wards, the surgery suite, and an arena filled with donations. They received so many donations that they donated the excess to the public, providing people needed supplies to help care for their pets.

I recently contacted them asking what the tally of all their hard work was. Here was their 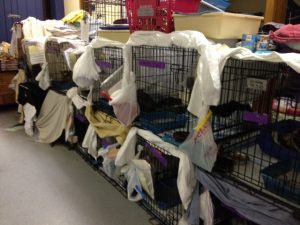 response:
“The Animal Resource Center processed 158 dogs and cats at our facility alone. 89 of those were reunited, while the rest were adopted.

We had 1,143 volunteers during the 45 response days. Those volunteers represented 28 states.

All of the processed animals at all 3 response locations, not just those at the ARC, were spayed or neutered, received all vaccinations, were heartworm checked, and microchipped. At our location, we had 10 dogs test positive for heartworms; all 10 are being treated.

The Animal Resource Center received $117,000 in donations and has so far spent $114,000 on medical bills for injured animals, spay and neuter costs, and boarding for dogs whose families were rendered homeless by the storm.

Also, you may like to know that any animal that lived in the disaster area, not just those who were lost, received the services of spay and neuter, vaccinations, microchipping, heartworm testing.”

Tune in next week to read about how to create a disaster plan for your pets!