My Dog Has Separation Anxiety

My dog, George, had separation anxiety when I first got him. That became apparent the first time I left him home alone. I had kenneled him securely prior to leaving for work, yet when I returned, George was waiting inside the front door. He was panting, crying, drooling, and very agitated; I found the kennel door off its hinges and the wood flooring beneath it destroyed by George’s toenails as he dug at the door to free himself. 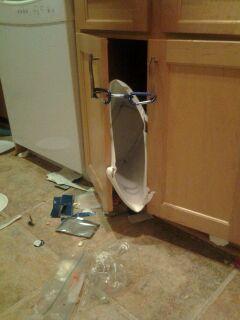 That was the first of George’s many escape attempts. No kennel could hold him, and he had no regard for his own well-being either – he once broke off a tooth gnawing at a kennel door. If allowed free rein of the house, George would pee everywhere and chew on furniture. After one of these destructive episodes, I broke into tears on the living room floor. I was almost to the end of the Animal Humane Society’s 30-day return policy. I wasn’t sure I could face a future full of George’s neuroses, but of course, I already loved him. I called my boss, a veterinarian, and asked her opinion. “Well,” she said, “Do you want a dog, or do you want this dog?” “What do you mean?” I asked. “If you just want a dog, bring him back to the Humane Society. But if you want this dog, then we can figure this out.” That sealed the deal. I wanted George.

Separation anxiety is a condition I wouldn’t wish on any dog owner. It can be very difficult to treat, taxing on both your heart and your wallet, and it may never completely resolve. George didn’t even have separation anxiety as bad as many dogs do. Dogs with severe separation anxiety will dig through drywall, destroy doorframes, and chew through window screens. Some dogs ultimately escape, leaving them at risk for getting lost or hit by a car.

No one really knows what causes separation anxiety, and it can develop in any dog at any age. Many dogs who develop it, however, are shelter dogs. Dogs who have experienced a big change in their lives (the death of a primary caretaker, death of another dog in the household, a major change in a daily schedule) are also more likely to develop separation anxiety.

Know that, if your dog has separation anxiety, he isn’t being “naughty” or disobedient. Dogs with this problem are terrified to be alone. Their behaviors reflect this terror. They may pee or poop on the floor, bark or howl, dig or chew – especially on windows or doors in an attempt to escape. Their agitation might begin as you prepare to leave the house – whining and pacing as you put on shoes or collect your keys, wallet, or purse. If he or she has separation anxiety, scolding your dog can actually make the problem worse. 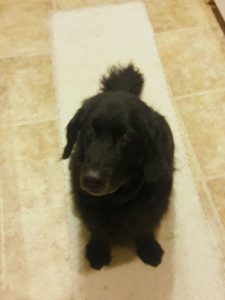 If you suspect your dog has separation anxiety, the first thing you should do is to visit your family vet. There are many anti-anxiety medications that can help your dog feel calmer while alone. In combination with medications, desensitization training is recommended. In order to desensitize your dog to being alone, you begin by going through the same process you normally would to leave the house. You then step outside and back inside immediately, gradually lengthening the amount of time you stay outside. The goal is to be absent for short periods (and eventually, long ones) without provoking anxiety in your dog. The process is by necessity slow and time-consuming.  You can help it along by giving your dog special treats or toys that he only gets when you leave – like Kong toys stuffed with peanut butter or cheese. Keep in mind that not all dogs are like George; some appreciate the security of a kennel.

Pheromone sprays or diffusers may also help, and some dog owners like to leave on a TV or radio, too. And because exercise is never a bad thing, it doesn’t hurt (and it may help!) to make sure your dog is good and tired before you leave the house.

Because every dog is different, what worked for George may not work for your dog. Luckily for me, because I work at AERC, I was able to bring George to work with me. He still showed signs of kennel anxiety, but because he was mannerly, he was allowed to sleep in a bed under my desk. Some days, he went to a doggy daycare. I was also fortunate that he showed no signs of distress if I left him at home with another dog, so friends would loan me their dogs to be George’s “canine babysitter” for the day. Interestingly enough, many dogs show no sign of separation anxiety when left in a car. So if the weather is cool and the area is safe, leaving your dog in your car while you’re at work may be a workable option. 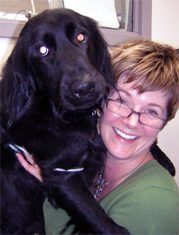 After I’d owned George for seven months, I attended a veterinary class about separation anxiety. The speaker was a firm believer in videotaping dogs when they were home alone to confirm the anxiety and also to see exactly what behaviors dogs were displaying. George seemed much calmer by this time, and he was even spending 30-60 minutes home alone without destructive behavior, so I decided to set up a videocam and see what he was up to. Imagine my delighted surprise when I saw that George spent most of the time in my absence slowly wandering around the house, showing no signs of distress at all! Over the course of his time with me and working with and around his problem, George’s separation anxiety had resolved.

George is now 14 years old, and while he sometimes shows tiny remnants of his previous anxious behavior, he is not destructive and he can be left at home all day. If your dog has separation anxiety or you suspect he may, please consult with your veterinarian. Depending upon the severity, it may be difficult to treat, but it generally will not resolve if you do nothing. George turned out to be the best dog I’ve ever had, and while I have nothing but empathy for owners who have to surrender or euthanize their dogs for this terrible problem, for me and George, it turned out well.