Lucy, a Cocker Spaniel, was picked up as a stray by a rescue eleven years ago. She had 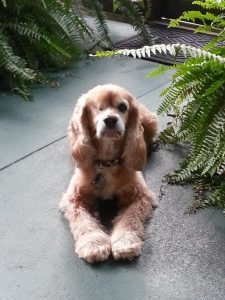 been abused and had to have one eye removed from a previous injury. Regardless, she was adopted in 2005 and went into the loving home of Katie Ryan. “When I first got her, she was terrified of new people, terrified to go outside alone, and her hair was like straw,” says Katie.

Katie first learned that Lucy had a heart murmur a few years ago. VCA Feist Animal Hospital is Lucy’s family veterinary clinic, and they detected the murmur. Then, in January 2015, late at night, Lucy collapsed and had a seizure. “I brought her to Animal Emergency & Referral Center of Minnesota at the West 7th Street location,” Katie recalls. “The emergency vet told me she was in heart failure, and that if she survived the night, she would be on medication for the rest of her life. At that point, Dr. Michelle Rose became her regular cardiologist.”

On the chest x-rays, Dr. Rose could see that Lucy’s heart was quite enlarged. Her larger-than-normal heart was caused by a poorly functioning valve. The valve was not closing properly due to chronic degenerative valvular disease, a common disorder in older dogs like Lucy. The degeneration and thickening in the valve was causing blood to regurgitate into her left atrium, leading to cardiac enlargement. 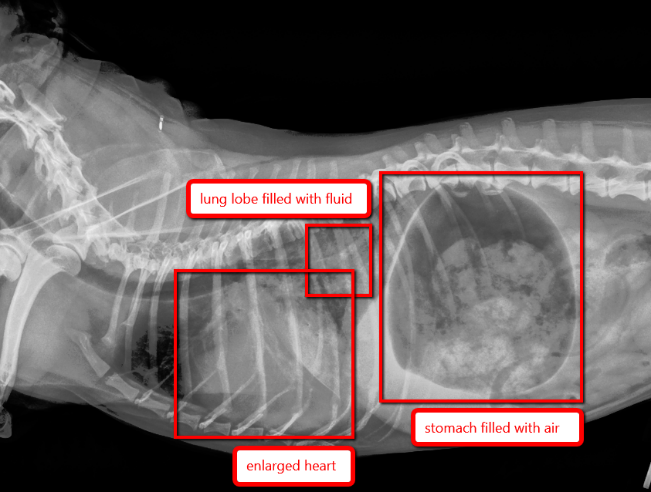 The most striking feature of the “Before” x-ray is the fluid (called “pulmonary edema”) that is visible in the caudal lung lobes. The caudal lung lobes are typically the ones most affected by congestive heart failure. Here, these lung lobes are filled with fluid, instead of air, causing Lucy to cough and have difficulty breathing. Fluid on chest x-rays will appear white, whereas air will appear black. These lung lobes are much too white, and no normal black air is seen. In contrast, there is a lot of air in the stomach, which is caused when a dog struggles to breathe and gulps in air.

A radiograph taken one week after the first set shows that Lucy has responded very well to her congestive heart failure medications. She is also no longer coughing and struggling to breathe! Her heart silhouette is still large, but it has decreased somewhat. The previous whiteness (fluid) in her caudal lungs is significantly reduced; now, black air can be seen there. You can even see the normal blood vessels in her caudal lungs, whereas before, they were hidden by fluid. There is also much less air in her stomach. This radiograph represents a fantastic response to therapy! 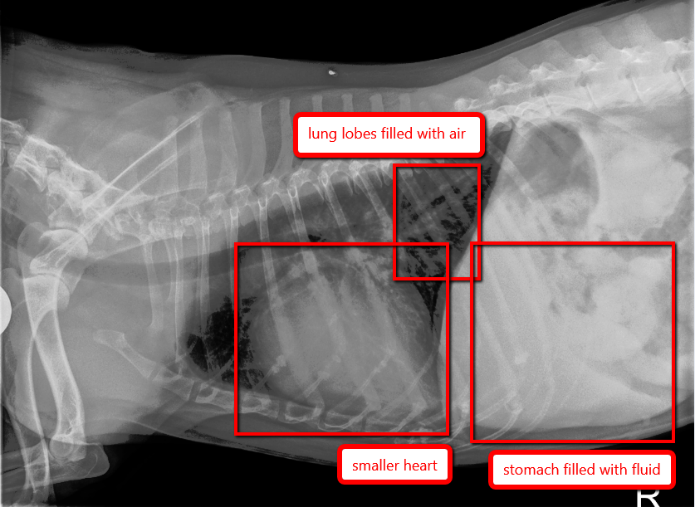 And what kind of differences is her owner seeing? “Lucy is full of energy and enthusiasm! She loves to take walks, play in the snow, and go for car rides. She is very food-motivated; she especially loves bananas and homemade peanut butter treats! She is still afraid of strangers, but she deeply loves the people she knows and trusts,” says Katie.
About AERC’s Cardiology Department, Katie tells us, “Dr. Rose and Krista have taken such good care of Lucy. They keep me very well-informed about what tests they’re running and what the results mean.  They clearly care about Lucy, and they have overcome her social anxieties and earned her trust, which is huge. Now, over a year after she went into heart failure, Lucy is thriving, and I attribute so much of her success to the care she receives from Dr. Rose and Krista.