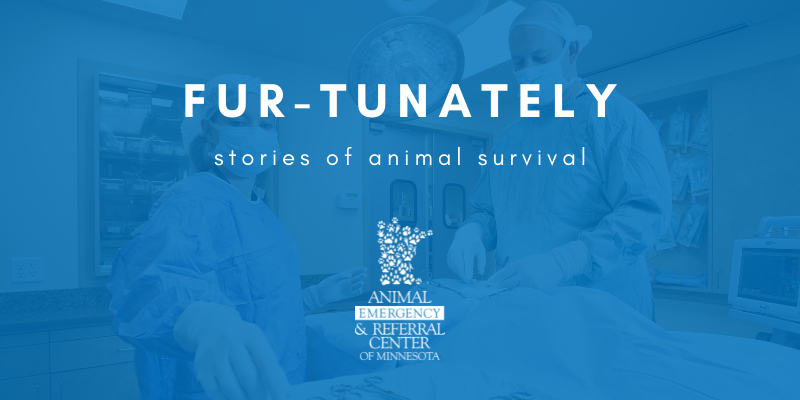 Once upon a time, there was a kind-hearted rabbit named Ed. This four-year-old Holland Lop had quite the adventure at Animal Emergency & Referral Center of Minnesota’s emergency room with an unlikely hero that reminds us all of the magical power of diagnostic testing. But we’re getting ahead of ourselves! Young Ed’s tale doesn’t begin in our ER.

One day, Ed’s human noticed he wasn’t his usual, hoppy self. He wasn’t active and he was barely eating. Ed’s human was knowledgeable enough to know that these are typical signs of Rabbit Gastrointestinal Syndrome (RGIS). Treatment involves syringe-feeding, so Ed’s human attempted syringe-feeding Ed at home – but alas, Ed resisted – prompting Brave Ed’s quest to regain his health! His quest would take him on an arduous journey through the faraway land of emergency medicine.

As Ed arrived at the emergency room, our ER team gallantly took charge. Ed’s illness had left him dehydrated, and his belly was painful. The magical power of x-rays revealed the handsome bun’s stomach was bloated with food and gas, but the source of Ed’s illness still lay hidden from view.

And then, galloping in on a white horse, comes the unlikely and humble hero – bloodwork! In a true fairy tale, Ed would be able to talk on his own. Since this is real life, Ed’s bloodwork results told the tale for him: courageous Ed’s liver values and white blood cell count weren’t normal! Which could only mean one thing: a plot twist!

The combination of high liver values and abdominal pain put our team on high-alert. Could it be? Only an abdominal ultrasound could confirm…and that’s how Dr. Nevins, one of our board-certified veterinary radiologists, discovered exactly what was wrong with Ed the Rabbit. Charming Ed was facing a fearsome right-sided liver lobe torsion! 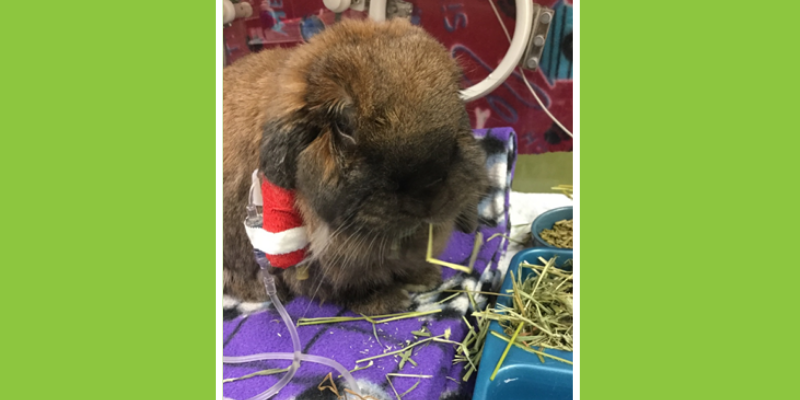 Fairy tales aside for a moment, for those unfamiliar, liver lobe torsion (also known as hepatic lobe torsion or hepatic infarction) happens when a portion of the liver twists. The twist cuts off blood supply to that lobe and causes the tissue to die.

While the exact cause of liver lobe torsion is unknown, it can be related to:

Some rabbits survive liver lobe torsion with medical management, but surgical lobectomy (the removal of the damaged lobe) is the preferred treatment method.

With no time to waste, Ed’s human approved surgery. On the eve of the ultrasound findings, Dr. Anderson, one of our board-certified veterinary surgeons, became Ed’s knight in (shining?) PPE armor. Wielding his forceps, clamps, and blades, Dr. Anderson removed Ed’s right liver lobe, which had become twisted and died.

The battle was almost won, but brave Ed wasn’t out of danger yet. After surgery, his body temperature became dangerously low, and his blood pressure dropped. The ER brigade gave him additional intravenous fluids and focused on warming him up.

Before he could return home, Ed needed to stay in-hospital for two more days to ensure he was eating well and his pain was well-managed. As soon as his e-collar was removed, Ed was the happiest bun in all the land and began eating hay, as well as grooming himself. He was then able to make the triumphant journey home with his human. 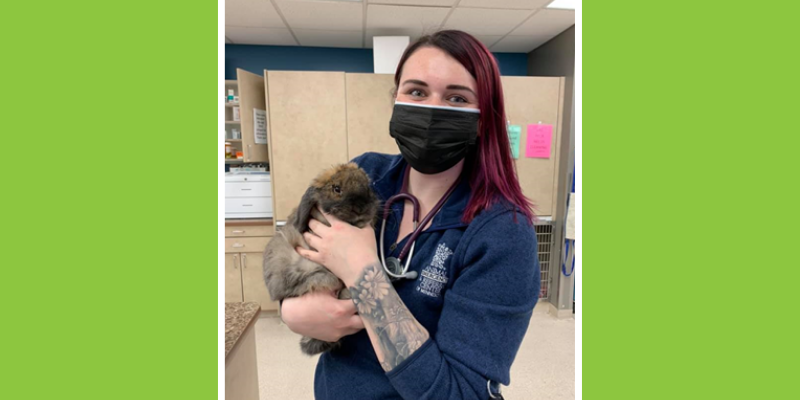 Ed the Rabbit recovered well and returned to our Oakdale facility for a recheck exam with Dr. Bean, who is board-certified in Exotic Companion Mammal Practice. Ed’s human reports that Ed is back to his old self and doing well! And if that isn’t happily ever after, we don’t know what is!

While we’re thankful for Ed’s happy ending, Ed’s harrowing tale demonstrates why initial diagnostic testing in rabbits is so important! Ed’s symptoms pointed towards Rabbit Gastrointestinal Syndrome (RGIS) and x-rays revealed no indication of liver lobe torsion. Fortunately, bloodwork saved the day and prompted our team to perform an ultrasound. This was the only way the liver lobe torsion would have been discovered. Any delay along the way could have been fatal to courageous Ed! We’re so glad Ed will live to tell many more tales!

Seeking veterinary care for your rabbit? All of our local veterinary partners who see rabbits are listed on our website: https://aercmn.com/about-us/locally-owned/

Need referral care for your rabbit? You can set up an appointment with Dr. Bean, who is board-certified in exotic companion mammal practice, through our Avian & Exotic Medicine Service. Learn more here: https://aercmn.com/veterinary-services/avian-exotic-medicine 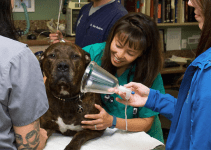 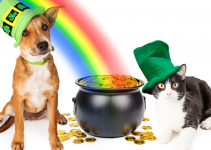 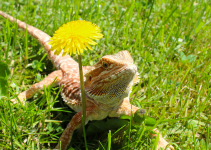