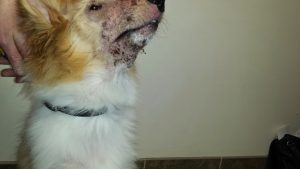 Cody was only a puppy when his new owners brought him to see Dr. Melissa Eisenschenk, the board-certified dermatologist at Animal Emergency & Referral Center of Minnesota. Cody, a Rough-Coated Collie puppy, had a severe infestation of a skin mite called demodex. While these mites are common and usually don’t cause problems, in young puppies with developing immune systems, they can get out of control and cause a condition called demodectic mange.

Since the mites live deep under the skin, they move from one animal to another via long, direct contact, such as from a mother dog to a puppy. In fact, Cody’s entire litter had become infested with the mites. It had taken some weeks after his adoption for the condition to emerge, but now, poor Cody’s skin was a mess. 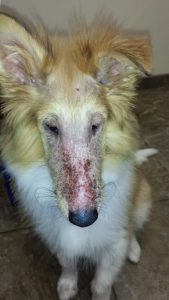 As you can see from the photos, on his first visit to AERC, Cody’s nose and face were bald; his pink skin was raw, inflamed, and covered with crusty scabs. He was losing hair on his back and front legs, too, as the mites spread across his body. He had also developed a skin infection. He was scratching constantly because of how itchy the mites made him. “The first time I saw him, I just wanted to cry!” says Michelle, the dermatology technician. Despite his condition, Cody was still a happy, energetic puppy!

Usually, Ivermectin is the drug used to treat demodex mites. However, many Collies have a mutant gene that reacts poorly to Ivermectin. In fact, for these dogs, the drug can be deadly. Cody was tested for the gene by his family vet, Dr. McConville, at Woodbury Animal Hospital. Unfortunately, the test came back positive for the mutant gene. Ivermectin could not be used to treat Cody’s mange, or he could die.

Dr. Eisenschenk decided to try treating Cody’s mites with weekly treatments of Advantage Multi, a topical flea and heartworm treatment. Cody’s owners applied Advantage Multi to the skin on the back of Cody’s neck once a week. He also needed an antibiotic for the infection.

Five weeks later, Cody was doing much better. The hair on his face and legs was growing back, and the scabs were nearly healed! At his recheck exam six weeks later, however, Dr. Eisenschenk saw that although the Advantage Multi was killing some of the mites, it was not killing enough of them to rid Cody of the infestation. A stronger option was needed.