So today was the day. We euthanized Mickey. It came so suddenly, even though I saw it coming months ago. Last night, Mickey couldn’t settle down. He wouldn’t sit on his blanket in front of the

heat register, but wandered slowly around the house, stopping to stare at nothing on the wall, like a wind-up toy that had wound down. Every once in a while he would meow, but his characteristic bossy meow had become more of a low moan. He wanted to go—of this much I was sure. In fact, part of his mind had already left. He just didn’t know how to get the rest of himself there.

I brought him into AERC with me this morning. Our team, as usual, was amazing. Kara expressed her sympathies when I called on the phone; I passed Mickey into the competent hands of Kristen and Bryan when I arrived. They placed a catheter in his tiny, dried-up-old-kitty veins, and brought him to me to hold, wrapped in a fleece blanket. Kristin and Dr. Karen stayed with me. Alisha got the clay paw ready for his little foot (missing one toe on one foot). 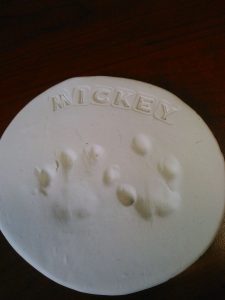 I stroked Mickey’s head and told him I loved him. I told him he was a good cat—a great cat. I told him goodbye. Mickey purred as Dr. Karen injected the catheter in his leg with euthanasia solution. About halfway through, he suddenly sat upright, leaning forward, then relaxed back down, and he was gone. I like to think that was the moment his soul sat up and said, “Let’s go!” It was the right time. It was a good death. It was everything we want for our pets: there was no suffering or fear, and Mickey was held closely by someone who loves him.

There is a book we give to clients who euthanize their pets at our clinic. It’s called Snort’s Special Gift. The author, Suzann Yue, is from Minnesota, and she writes beautifully of her daughter’s relationship with their Boxer dog, Snort, and how much the young girl realizes she has learned from Snort after his passing.

I learned a lot from Mickey. Mickey came into our house at 15 years of age; from him I learned it’s never too late to adapt. He slid effortlessly into our already crowded three-cat, one-dog, two-children home and seemed grateful for the opportunity to do so; in this, I learned that sometimes getting along is more important than getting your way. And although he tolerated a lot and never complained, he always made sure his voice was heard at mealtimes, because some things are worth being loud about.

My seven-year-old was fighting back the tears this morning when I told him it was time for us to help Mickey die. He loves his cats like nothing else. But his eyes brightened and he managed to pull on a smile anyway as he told me, “We’ll see him again someday.”

I sure hope so.