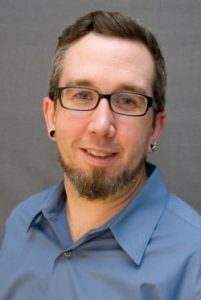 Tate joined the AERC team part-time in 2013 as a “handyman” of sorts–keeping the clinic in good repair. In 2015, he joined us full-time as our Facilities Manager. As such, Tate oversees the maintenance, operation, and efficiency of all hospital facilities and IT. His role is critical to the safety, cleanliness, and operational function of our buildings, which, in turn, supports the continuous care of clients and patients.

Tate’s pets include a PitBull Mix named Betty, a Black Lab Mix named Gertrude, three Domestic Shorthair kitties named Motorboat, Railroad, and Vespa, and a Bearded Dragon who goes by the name of Beardo the Weirdo!

Something notable about Tate? He has no spleen (due to a mountain biking accident), and he used to “model” toys for Tonka Toys way back when he was a wee baby.

Outside of work, Tate’s hobbies include raising two first graders, reading, binge-watching television shows, Legos, biking, and an ongoing battle to clear his backyard of buckthorn.