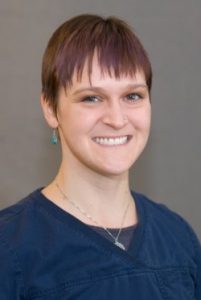 Tammy earned a BS at University of Wisconsin in River Falls; then she went to Argosy University and got her Veterinary Technology degree. Before she came to AERC, Tammy was an employee at the famous Best Friends Animal Sanctuary in Kanab, Utah, where she helped provide veterinary care for the 1600 resident animals.

Tammy has two dogs, Remington and Gambit, both Shepherd mixes. Gambit and Tammy compete in Canine Scent Work; she and Remy have “dabbled” in other dog sports, but they’ve never found one that he really wants to keep doing. Tammy also has one cat – Tillie the Calico – who, Tammy says, “thinks she is part dog and always has something to say!”

If Tammy could have any animal as a pet, she has an unusual animal in mind! She would choose the mini-dinosaurs that were the size of a chicken in Jurassic Park: The Lost World – called Compsognathus. We would have thought those movies demonstrated without a doubt that dinosaurs reject the notion of captivity, but apparently not to Tammy! She says, “I would totally own one. I mean – what’s not to love?