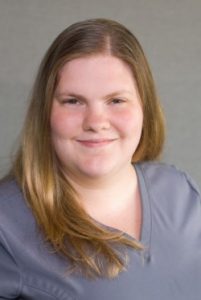 Inga graduated from Ridgewater College in 2015 with an AAS degree in Veterinary Technology. She was previously employed at the U of M as a Large Animal Technician.

Inga loves working at AERC, but when she was a child, she was obsessed with wolves and wanted to work with conservation efforts to save them. These days, she would still jump at the chance to work with wolves, but her dream has expanded to include a wider breadth of large predator animals.

Inga has two fears that she considers to be silly – standing on ladders, and walking on suspension bridges or docks (difficult to avoid in the Land of 10,000 Lakes…)  When asked to name a song that always puts Inga in a good mood – her answer is Stayin’ Alive by the BeeGees! (well of course!)