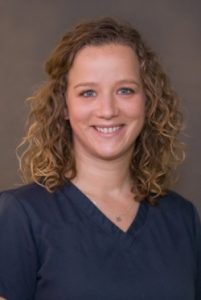 Brianna graduated from the University of Minnesota with a B.A. in Sociology. Later in life, she attended Argosy University where she earned an A.S. in Applied Science and became a certified veterinary technician. Brianna joined the neurology service at AERC in 2017.

Outside of AERC, she was a volunteer dogwalker with the Humane Society for a few years. Her animal-related interests also inclue dogsledding! Brianna did an eight day winter camping and dogsledding program with Outward Bound some years ago and would like to do more in the future. Brianna’s own dog is Henry, a Wire Fox Terrier.

Brianna enjoys cooking, trail-running with her dog, spending time with family and friends, and eating. Her favorite type of cuisine is modern American/French and also classic steakhouses. She says, “I definitely spoil myself through food!”