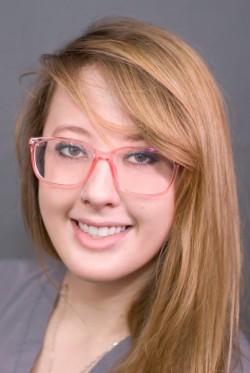 Becca has been a certified veterinary technician since December of 2012, starting in a mixed animal practice. She joined AERC in 2014 as a part-time technician and fell in love with emergency medicine. Eventually, we won her over, and in August of 2016 she agreed to become a full-time team member!

Becca is a self-professed “crazy cat lady!” We’re not sure about that, since so far, she only has a few in her life: Squeaky, an orange and white domestic shorthair, Thea, a white and grey domestic short hair that keeps Becca laughing with her silly antics, and Amalek, a Desert Lynx with a fierce personality. Becca also has a hamster named Truffle; he was rescued from a box on the side of the road in frigid weather!

In her free time, Becca likes hanging out with her cats, playing XBox with her boyfriend, hiking, biking, playing board games, crafting for fun and selling her projects on Etsy, and attending church.